Patti Berman has been the President of the Downtown Los Angeles Neighbourhood Council (DLANC) for four terms. She brings forward programs that support small business owners and people who live in DTLA.

Walk around Downtown with Patti and see people greet her with unbridled enthusiasm. It’s likely everyone in this area has an idea who she is.

People share the news on their business, invite her to art events and cafe openings. They come to tell their personal stories.

In a past life, Patti had several careers. She is the former licensed Scuba Instructor.

She also spent years as a Saloon singer on the American nightclub circuit. She is still often invited to perform at the community special events.

These days, along with being the DLANC President, Patti is a small business owner. Her company designs computer applications for Federal Accounting.
She works as a part-time bookkeeper for the Historic Downtown Business Improvement District.

It all helps her to better address the needs of the DTLA entrepreneurs who may need a little support.

In summer 2017 hundreds of visitors came to Downtown to enjoy a series of free jazz shows.

Patti and a group of volunteers “Friends of Spring Street Park”
have spent months making sure this event can happen.

They invited popular musicians to play on a big mobile stage on the grassy area of the park. They worked with security, making sure you can feel safe.

Spring Street Park is the first substantial green space in the Downtown historic center. It has a lawn, a playground, and a seating area.

It used to be one of the many parking lots, tucked away in the shade of the big buildings. Most people didn’t fancy living here.

Today, many lofts in the Spring Street buildings got renovated. They are a popular choice for the new DTLA-ers.

Young parents are attracted by the cute playground for their kids.
Dog owners come to walk their pets and stop by for a chat with the neighbors. 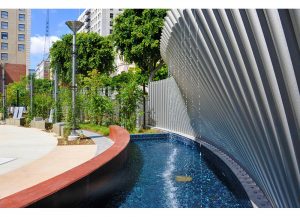 While everyone appreciates the green area, Patti and other enthusiasts are working on ensuring new funds.

They want to be able to put up a permanent stage in the Spring Street Park one day.

Patti hopes to be able to open new green spaces and to support more Art Projects in every part of the Downtown.

It’s all about Diversity and Inclusivity…

DTLA is home to various communities. Patti’s mission is to bring them closer together. This is the way to make the neighborhood a vibrant and attractive place. A place where no-one is pushed out.

One of Patti’s main priorities as the DLANC president is to address homelessness.

She worked on the Restorative Justice programs. She saw the recidivism rate for the Downtown RJ participants is only 2-4%. It is significantly lower compared to the traditional justice system.

As the President of the Neighbourhood Council, Patti participates in the meetings of DTLA planning committee.

She hears the vast majority of the development projects. When the board decides they’re in favor of something, she goes to City Hall to speak on its behalf.

It helps her to bring to life the important parts of her vision:

– To make the Downtown area more sustainable and livable.
– To make sure that the people who live in an area have a good say about what comes in and what doesn’t.

Patti Berman moved to Downtown LA in 2001. Back then there hardly were any cafes or supermarkets around.

Walking outside on your own felt less safe too.

Yet, she loved it. It was completely different to her previous life.

Patti used to live in a house far out in the desert.

At that point in her life, she wanted to change her environment.

That’s how she found herself looking up for lofts online.

Soon enough, she found the one she liked and moved in.

Downtown LA immediately felt like the right place to be.

She became a long-time supporter of historic Downtown Los Angeles. Since then she has been “helping to make this place better.”

Why she loves Downtown: